Jury motivation
The project convinced the jury by its capacity to fill the notion of the private art gallery with new life and contemporary meaning. It reevaluates and displaces the abstract ideal of the white cube art space according to the specific conditions of its urban context as well as contemporary concepts of curating. Burying half of its volume in the ground, the project manages to keep the scale and character of the context with its mostly two-story buildings.
Dramatically siting on an inclined corner site and an unusual materialization, the building does not give away its programmatic identity too easily, but cultivates an air of estrangement about it which may well help to anchor it safely in its community.
Its cultural program presents a welcome of the predominantly residential character with its mostly two-story high buildings. At the same time it introduces a welcome shift. 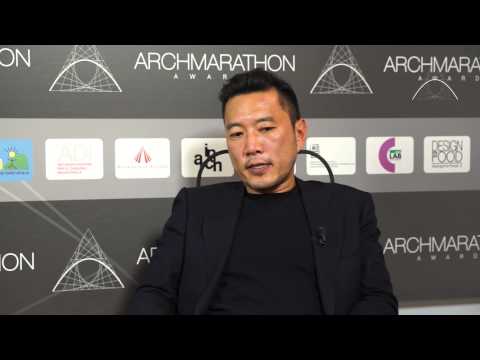 Buk-Chon, where Songwon Art Center is located, is one of the few areas that were less affected by the heavy wave of development that has been sweeping through Korea since the fifties.
The townscape is based on an irregular network of streets that weave through the area, where the han-ok is the dominating architectural typology. During the past 10 years Buk-Chon has seen lots of buzz primarily caused by the newfound interest of the public on the traditional townscapes. Han-oks (traditional Korean houses) have become a subject of admiration again, and many commercial/ cultural businesses have been brought into the area to take advantage of this setup.
In this social context, it is consensual that any new development in the area intrinsically faces the challenge to simultaneously conserve existing values, and contribute in a new way to what already is. Not surprisingly, with our project we faced numerous restrictions and conditions that were inherent to the site. The design development process took an unusual amount of time – as we neither wanted this project to become a compromise to the restrictions nor a mere negotiation between the contextual obligations. The design is a result of optimizing the parameters, sensitively reacting to the surrounding and simultaneously developing a rigorous logic.